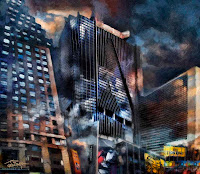 
Sculptor Alberto Giacometti wrote, "One never sees things. One sees them through a screen." He argued that the image held primacy over the existence it was supposed to depict.

I take photographs, not so much to remember where I've been, but to discover it. My scan of a moment which will never come again is infinitely inferior to my camera's scan of that same instant. Later I can study it through a different lens... the lens of my emotions and feelings which I can focus infinitely tighter than the distractions of the original moment allowed me to do. There, in my studio, I can find in the image shiny details which come together to form conclusions that were simply not obvious at the 'real' instant.

There is so much more in a photo than in memory. And so much more that imagination can do with that memory when it's discovered for the first time in a quiet study of its photograph.

I had the Giacometti quote in mind as I prowled Manhattan soooo.... Pre-Processing: Last week in Times Square. Usually we look to the Times triangular building from some one or another angle... and we miss the walls to that square. Chris and I ate our lunch from behind one of those windows on second floor of that building up there to the left. And we peered down on the swirls going on below. Then we came out, and I looked back and up... and grabbed four shots for a pano.Post-Processing: I had Photoshop CS4 stitch together the pano using the power of its 'collage' layout option with which I deliberately created a tumbling effect. Then I stitched them together again using the 'cylindrical' option which allowed me to tease out the central building as the star of this trio. I added palette and a sky from Cape Cod. I used Topaz in part to dramatize some elements and the Oil painting option (carefully applied in stroked layers) to the scene all around the central building to drop them back and to allow that central building to pop. Of course there is considerable detailed work with the dynamic range. As usual, my final file for this image is about a gigabyte. I'm a storage hog.
Posted by Ted at 5:26 PM

A masterful use of your tools and talent.