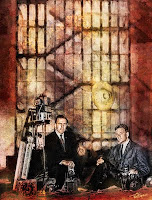 We lugged all of that stuff from the college darkroom up on the second floor behind us. It was the middle of the night. See the big thing right in front of me? That's a Korean War aerial camera. My buddy Jim Furlong found it somewhere, got us some film and found a single engine, three seat plane with an overhead wing. We took the door on my side off so when the plane banked I could dangle right over the city held only by the seat belt. BTW, that monster camera didn't have a neck strap so I held onto it hard as the ground sped ay below.

We've got those odd expressions because we'd created a timer for the big ole 4X5 Speed Graphic camera. We just sat there waiting and waiting until PHWUMP! Flashbulbs popped all around us. Yep, flash bulbs! Funny, that one shot took all sorts of planning and set up (not to mention break down) and yet, who cared? We were young and time and muscle was what we had.

Jim Furlong was the most important photographer who ever lived. Because he infected me with a graphic obsession that's never gone away... that's why. I always wonder as my work comes together, what Jim will think. He created hurdles, and rewards.

Late last month Jim died. But I always wonder as a new image happens, "What will Jim think about that? You've got to have a standard, right?
Posted by Ted at 9:33 PM

Those memories are always the best: My congratulations. Sure would have liked the image.

(Andreas) - Right, and time to see you on your life passage at http://manessinger.com/. BTW, the new site seems to ROCK! Do you love it?

(Angel) Yes, I think Jim would have liked this image. The original was his idea, the interpretation, mine We seemed to collaborate easily.

(J.L.T.) Color adds a whopping emotional impact to an image, don't you think? Thanks for the support.

Now that I've done it, I'd say it was worth it, although it was much more work than I had anticipated.

Yes, it is very convenient to have all in one place. The concept of WordPress to make a difference between blog "posts" and more static "pages"is a big plus. Yes, I'd say I love it, but then, I'm a programmer. I could easily write the programs that I needed for transition, my own image resizing and upload program, etc. I wouldn't recommend that route for anybody who is not from IT. Much too much hassle. And again: if I had not wanted to get off SmugMug, I would still be on Blogger.