You're entering a Lancaster County farm. OK, you know I guess that this county sits atop America's richest non-irrigated land. Friends own the spread and they've just refurbished their stone

barn. So they let me take sunrise pictures last Tuesday (June 19th). There was a storm brewing in the east as the sun rose just beyond those trees. No, that's not their farmhouse there beside the road, nor is that the restored barn to its right. Today they're both storage structures. See the cobblestone drive? They're from Europe. Once upon a time, empty or partially filled sailing ships needed ballast on the way over. The blocks were quarried on that side of the Atlantic and dumped over here into large mounds around Chesapeake and Philadelphia ports. Hence they were free resources to early road builders. They are just one authentic touch on this 18th century working farm.

Now turn around 90 degrees and facing West... Look how the cobblestones wander through the alleyway with a spring house on the right and on the left - Yep: Here's the authentic 1840 Pennsylvania barn. 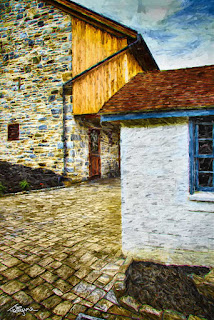 The Pennsylvania Barn’s main feature is the projecting 7-8 foot forebay, or overshoot. But, it is important to remember that in order to be considered a Pennsylvania Barn, it must have these essential features: a projecting forebay and banked construction, almost invariably with the eaves side in the bank.” The Pennsylvania Barn appeared late in the 18th century and flourished from about 1820 to about 1900. It is most common in the southeast and central parts of the state (although it can be found in many parts of the state). Although people from all social groups built Pennsylvania Barns, they are most closely associated with the Pennsylvania Germans. And at the center of it’s epicenter of interest sits Lancaster County with this barn on the Armstrong farm in Refton built in 1820 and entirely restored in 2018.

GEEK STUFF:  I did the series using my Canon 7D, assorted lenses and post processing with a combination of tools from PSCC, Topaz, and Alien Skin. For particular drama, the sun rose through a cloud bank of a gathering late-spring storm providing a combination of strong light at first then flatter light perfect for avoiding the super contrasty early morning sun.