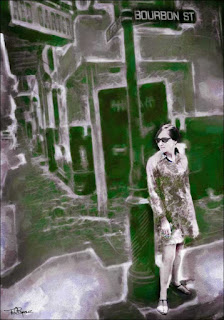 Still diving through the slide trove I found a couple of weeks back. They're coming out at random: Like the way miners find veins with explosives? Except for Kodak Carousel projector rings that were ordered, the rest are a jumble... memories smooshed together with the melange of Bingo balls in one of those tumblers. And like them, I reach in and pluck a moment out... Some ignite memory lights in wherever my brain stores things.

Others seem to be part of someone else's life entirely.

But here... here... Of course is our New Orleans honeymoon... Yep... Yep... I was there with Rita... Uh-huh... But this image? This instant? The colors faded away from the slide... and I cannot find them in my memory's storage bins. Why was the street so deserted? Was it too early for people? It was the first week of June so Summer'd happened way down there in Dixie. Maybe this was midday and only visitors like us were sufficiently weird to be out in the sun?

For sure it wasn't nighttime. Nope, nights in the Latin Quarter are NEVER this empty. Night's an open sluice gate on this street... Where people just keep on flowing like the ancient river a couple of blocks away.

We've gone back to this creole place a few times. Even after the flood, this part of town's still a honkey-tonk constant. It's good that some things don't change in a world that's nothing but. Still, it's a city that's so culturally and climatically foreign that living there'd kill me.

Up here in the north, the circus used to come to town every couple of years. They did that because customers wanted the break between visits. New kids had to grow into a appetite, and old appetites had to be resuscitated... Time allows both of those things. Both for the novelty of traveling circuses and traveling to circuses, like New Orleans.
Posted by Ted at 12:08 PM