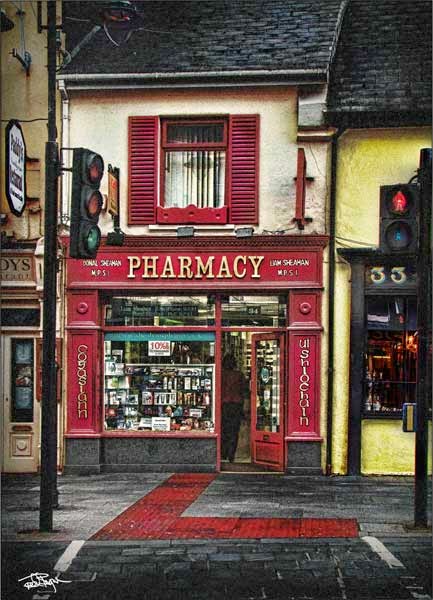 How to mute Killarney?

It's a tourist town of about 12,000 permanent Irish residents, yet it seems to have more hotels than people. The city streets evoke Disneyland - or Disneyland evokes them. Their colors make for squinting.

And then there's the smooshing together of decoration, both around, on, and inside the store fronts. Killarney shops are shameless as showgirls in their efforts to grab attention. Blocks are eye-exhausting as Vegas in their palettes. Of course Vegas boasts performance architecture that's imploded, what? Weekly? Daily? Vegas won't tolerate history, or even nostalgia, much less antique.

Killarney, OTH, has a patina-of-shabby that seems as carefully adhered to its surfaces as the layers of paint which are probably  inches thick. And see how at first this image seems as if the camera was canted? but look closely, the lens was straight as a nun in a gay bar, but it's the shops themselves that are bent by age.

Now see this late afternoon sidewalk? While the blinds in the upstairs window boast mid-last-century dust, the sidewalks are surgery-table clean. Killarney's kept like a retro set for WWII soldiers, back when the photographs were black and white, but the memories were full-on chrome.

Killarney works at being a memory. But one that's hard to mute.

Geek Stuff: Shot with my Canon 7D, worked with PS the processed with Alien Skin Exposure's Kodachrome II to tease out the rich antique late-afternoon reds and memories that my grandparents and my mother brought to America.
Posted by Ted at 5:14 PM