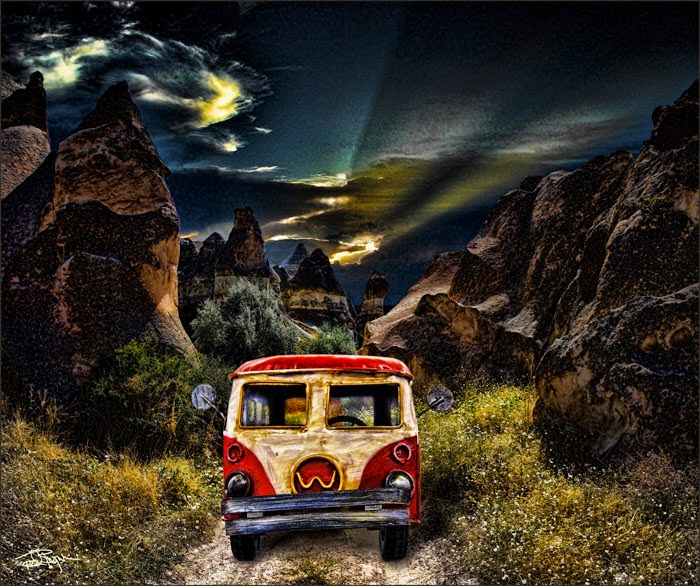 “It’ll be her last time,” Grandpa smiled, wiping some barn specks from the old bus.

“It’ll be like that first time,” Granny looked impish and wrapped an arm around her husband’s. “We’ll sleep in her. Remember Honey?”

“Don’t remember the sleeping,” he laughed turning his daughter’s face pink. “What I recall…”

“Daddy! The kids…” The young mother squeaked, but her children were clambering inside the thing grand-dad’d gotten to run after weeks of banging, re-tiring, and cleaning each rickety inch.

Months later… way… way… down an ancient roadway deep among the fairy chimneys its motor still puttering, the bus turned up. It’s been years since then yet they say that when the moon’s right, there’re noises back there: An old motor popping, a woman’s giggles, and the faintest laughter of a happy old man.

The rickety bus? Found it at the weirdly intriguing South Of The Border just into South Carolina on I-95. Those ancient fairy chimneys are a five image pano grabbed in Cappadocia central to  Turkey in an enchanted land, oh… and one magical summer evening that sky hung over Las Vegas. The bus was captured by my old Canon 40D, the sky in an even older Canon 20D, the fairy chimneys by my Canon 7D. But each was focused through a trusty Canon EFS 17-85mm (f4-5.6). Post processing was done of these blendings in PS4 with help from Topaz Adjust, Perfect Photo Suite 6, and of course AlienSkin's Exposure 5.

The story of the _Ghost Bussers_ though… That wafted full-form from memories of VWs, back dirt country roads, and giggling happy friends.

I occasionally entertain the fantasy of finishing off my days in a small van with a Malibu board on top overlooking some ideal break. Probably won't happen but it already has in my head.