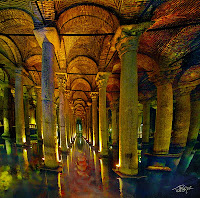 <- Click here
Lost for centuries beneath the streets of Constantinople the Sunken Palace was rediscovered by the Ottoman Turks to water their magnificent Topkapi Palace. Built from parts from his collapsing Western Roman Empire by Justinian in the sixth century, the structure absorbed the work of over 7,000 slaves.
Fed by a twelve mile distant aqueduct and still a working engineering masterpiece, the spooky lighting flickers over crystal waters broken by the tails of cavorting fish. The space is huge and detailed with the work of the ancient buildings whose columns and arches were mined for this stunning yet mysteriously hushed Istanbul masterpiece.
Istanbul, about 500 feet Southwest and fifty two steps below Turkey’s breathtaking Hagia Sophia.
Canon 7D, PS4, Topaz, AlienSkin: Exposure: Agfachrome, custom textures and
brushes.
Posted by Ted at 8:47 PM